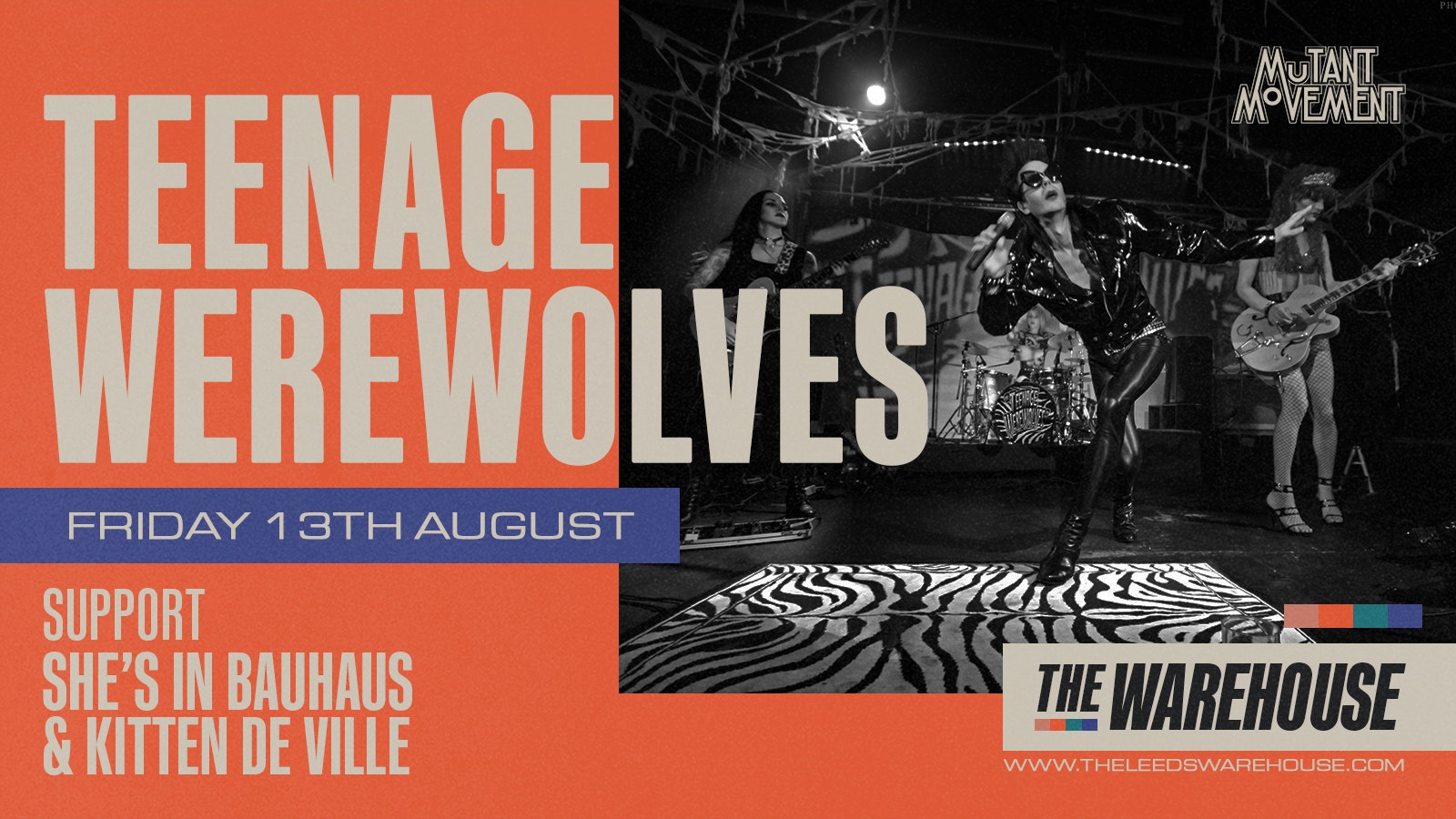 UK WOlfpack♦POST-PANDEMIC AUGUST Tour♦TWs are betting it all on live shows in AUGUST! Since you’ve stuck it out with us during this hibernation, we are clawing our way out, getting our rabies shots and booked our StAY SiCK Tour for you! https://facebook.com/events/2385705965073893

TEENAGE WEREWOLVES – the world’s best Cramps tribute return to England after their wildly successful 2019 UK tour. The most unlikely & ridiculous show you’ll ever find, started in 2010 with their visually intoxicating show preaching the gospel of The Cramps from the pulpit-stage in Los Angeles after the death of Lux Interior (rock’s most-uninhibited singer). . . Singer Jack Atlantis is from the same hometown as Lux and merge John Waters & Russ Meyers overtones to create an action-packed, freak-out show. . . Notable audience members have included David J (Bauhaus and Love & Rockets), (New Wave legend) Gary Numan, Jay Aston (Gene Loves Jezebel), Josh Homme (Queens of the Stone Age) and Pat Quinn (Magenta of Rocky Horror) who stepped on stage to sing the Time Warp with the band at their closing night in London. . See their ” Best of video “
“The Teenage Werewolves are the closest you can get to the real thing / creepy cool crooner Jack Atlantis channeling of Lux Interior was spell-binding” (LA Weekly). “One of the best rock shows I’ve ever seen” (David J of Bauhaus).
facebook / YouTube / instagram

KiTTEN de ViLLE, is credited as one of the originators of the “Modern Burlesque movement”. Starting her career in 1994, she regularly performs across the US, UK, & the EU, headlining with a variety of top musicians & performers from around the globe. . . Winner of “Miss Exotic World 2002” and “Queen of the Quake”, Kitten has graced the covers of books, magazines, calendars and newspapers worldwide and worked with top photographers from around the world, including David Lachapelle and Bunny Yeager. She has also walked the runways for acclaimed designers such as Jean-Paul Gaultier, Syren, and Agent Provocateur. . . Kitten was featured in the Hollywood film “Auto Focus” starring Willem Defoe, television shows, burlesque documentaries, independent films as well as music videos such as, The Cramps “Ultra Twist”, Rob Zombie’s “Feel So Numb” and J-Lo’s ,”You do it well”.
facebook / YouTube / instagram / website

SHE’S in BAUHAUS was created by singer Jack Atlantis, as a result of high-profile shows in Los Angeles California with original Bauhaus members Kevin Haskins & David J in the audience. “Jack’s voice & moves made me forget I was not watching Peter Murphy on stage from my drum kit” (Kevin Haskins, drummer of Bauhaus). Other audience members have said; “Somehow, Jack becomes more Peter than Peter Murphy”. . . This anticipated tribute show will be touring the UK by the same team who brought you the highly talked about show, The Teenage Werewolves. Witness this show’s first tour in June 2021 as it is destined to be the best Bauhaus tribute show in the world.
facebook / instagram

JESSICA HABIT is a freelance model with a story very similar to her idol Bettie Page. It began when she modeled for photographer Linden Adams, after he suggested that with her Amazonian stature (5’10″ barefoot), she had a striking resemblance to 50s pinup queen Bettie Page. Jessica had that eureka moment feeling a-kinship to Bettie’s kick ass assertiveness and begun to design her own underwear and clothes like Bettie. Linden has created scores of provocative photoshoots with Jessica and she then had the opportunity to be on stage with the Teenage Werewolves as a dancer and since that show in Derby, she has joined the band for their 2021 UK tour as a performer & burlesque dancer.
facebook / YouTube / instagram